The Arizona Court of Appeals recently issued a published opinion in a case that will lead to greater use of solar energy in Arizona. In Garden Lakes Community Association v. Madigan/Speak, the HOA was seeking to force the homeowners to take down solar panels installed on the roof. The Appeals Court found that the HOA's deed restriction and architectural guidelines, combined with the HOA's conduct, violated the public policy of Arizona as expressed in Arizona Revised Statute Section 33-439.

Garden Lakes Community Association is a master planned community located in Avondale, Arizona, with over 2,000 homes. The Madigans and Speaks, retirees living in the HOA, installed solar swimming pool heaters on their properties for environmental and economic reasons. Heliocol Solar, a member of the Arizona Solar Energy Industries Association, installed the Speak system. The homeowners wanted to use Arizona's abundant sunshine to heat their swimming pools so they could exercise without pain in winter months. Little did they know the solar panels would lead to five years of litigation.

The HOA filed a lawsuit against the two seeking an injunction requiring removal of the solar panels and approximately $100,000 in fines. Relying on the deed restriction and Architectural Review Guidelines, the HOA argued that the homeowners should have built a patio or screen to hide the solar panels. Madigans and Speaks countered that both options are prohibitively expensive and significantly reduce the efficiency of the systems. Madigans and Speaks won in the trial court but the HOA continued its litigation and appealed.

The Appeals Court, in upholding the lower court's decision in favor of the homeowners, concluded the HOA's restriction on solar panels "effectively prohibited the installation and use of SED's (solar energy devices)." The Association attempted to place restrictive guidelines on the residents that were contrary to the provisions of A.R.S.-33-439 (A). The Arizona Legislature passed ARS-33-439 in 1979 in order to protect individual homeowner's private property rights to use solar energy.

Many HOAs place restrictions on the installation of solar devices that add significantly to their cost or prevent them from receiving sunlight, which would render them useless. This practice is a significant barrier to widespread use of solar energy by Arizona homeowners. 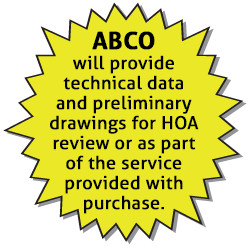